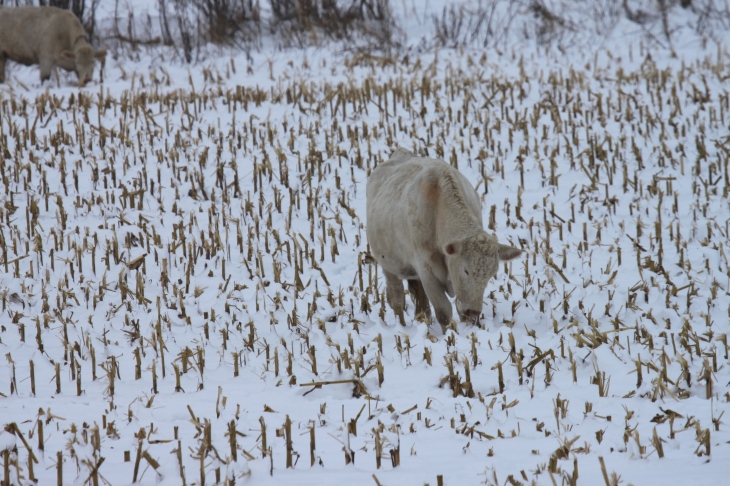 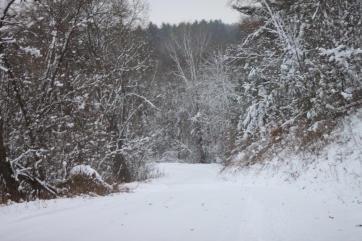 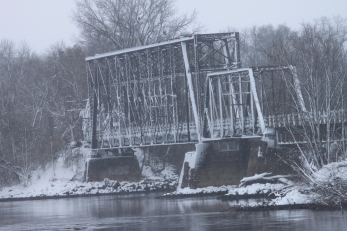 I got to spend nearly a week on a big ol ridge near the Buffalo National Scenic River. 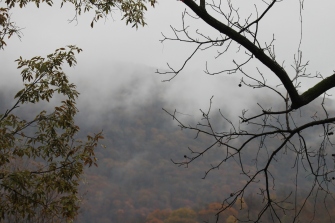 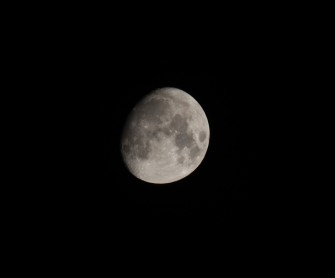 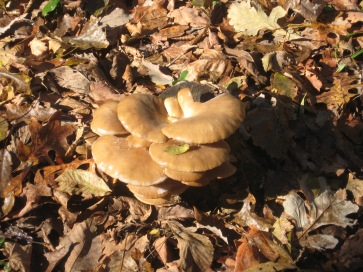 Being able to have a grand outdoor adventure in your backyard is one of the major benefits of living in Western Wisconsin. The Lower Chippewa River is a great place for a semi-wilderness river camping trip. On the Friday before Labor Day, I loaded up the square stern canoe with camping gear, fishing tackle, an outboard motor, extra gas, and launched the water craft at Ella and headed down stream. I motored downstream a few miles and after a bit of searching found an island with a nice place to land on the downstream end. Just above the landing on higher ground was a level spot perfect for pitching my tent and digging a small fire pit. I was home for the weekend. After my camp was set up, I christened the island “Ben Gunn Island” after the character in Treasure Island. Unfortunately, I did not have a map for hidden treasure or any rations of rum.
I set out to explore the island which I estimated was a quarter mile long and 50 yards wide. It had some silver maple and river birch on it I also found an eagle’s nest at the upstream end of the island and several fox snakes. I also spotted a few very wary squirrels.
With camp established and the island explored, it was time to fish. While traveling down river, I had spotted a promising looking eddy. I slowly motored back to the eddy. It is generally wise to take your time when boating on the Chippewa River. This constantly shifting river is full of trees, sand bars and the occasional rock. Their primary purpose is to remain hidden below the surface of the river in order to bust up props on boats. The motor on the square stern is especially vulnerable since it is mounted on a canoe and rides deeper in the water than the props on john boats which have a taller transom. So, it’s slow I go. Reading the water on the river to avoid obstacles and to follow the deeper channels is as critical when in a motor boat as it is when running white water in a canoe.
I reached the eddy and was soon anchored in the eddy and had a jig working the eddy line. At first there were no strikes. Then I got a snag and lost my jig, so I switched jig colors. I dropped the jig just downstream of where I lost the jig on a snag. My reasoning was that there may be a tree there that would provide structure for the fish to hide in. My reasoning was correct because I soon felt a “tap tap” on the line and after a nice fight I netted a 17-inch walleye. After landing the walleye, the bass started to hit the jig and I caught several nice fish. I decided to vary the diet a bit and keep a bass to go along with the walleye.
With Supper in hand, I headed back to my island. I boiled up some wild rice while I grilled the fish in their scales over the fire. I had a mighty fine meal. After supper, I tended the fire while watching the stars.
The next morning, I ventured downstream all the way to the confluence with the Mississippi. I saw several eagles, deer, seagulls and lots of waterfowl. Being on a river early in the morning is a great way to see wildlife. The bluffs on the west side of the river below Ella proved a scenic backdrop to the river and its wildlife.


I stopped to fish many eddies and other promising spots on the river. I caught a variety of fish including walleye, bass, mooneye, and sheepshead. I hooked a northern, but it was smarter than I. It ran down stream and turned sideways in the current and used the current to rid its self of the spoon. I did land one keeper walleye and cooked it up for lunch on a sandbar near the confluence of the Mississippi. I decided to not venture out into the Mississippi due to the heavy volume of holiday boat traffic.
When traveling back upstream to camp, I stowed the fishing gear and looked for critters and navigating hazards. I was happy that I missed all the trees in the river. That night several owls had a hooting contest while I was watching the campfire. I also left the remains of my fish fry on the beach for the eagles and it was quickly consumed by them.
Sunday morning, I ventured back upstream toward Ella to fish. The fishing wasn’t as good this day, so I landed on the east bank of the river and explored some open areas of the Tiffany Bottoms Wildlife Area. The area is a mixture of open meadows, oak savanna and river bottom hard woods. On my short hike, I saw silver maple, oak, river birch, ash, basswood, and maple trees. There was abundant evidence of deer, turkeys and squirrels although the deer and turkeys were shy, and I didn’t see any. I flushed several wood ducks out of a slough. It was a great hike.
After hiking, I motored back to Ben Gunn island and packed up camp and traveled back to the landing at Ella. I had a lot of memories and some fish stories to tell.

The 2019 Great Forts Folle Avione Rendezvous is over. So sad. A great time was had by all. I ran shooting events on Thursday, Friday, Saturday and participated in the Camp Champ competition in on Sunday. Shooters shot the following matches, Hunters, Mike Fink, Novelty, Pistol, and Trade Gun. At night it got so quiet and still, the silence was amazing. My good friends Leny and Dave gave a some amazing musical performances in front of the camp fire at night. Too bad the storms chased us out early on Sunday. 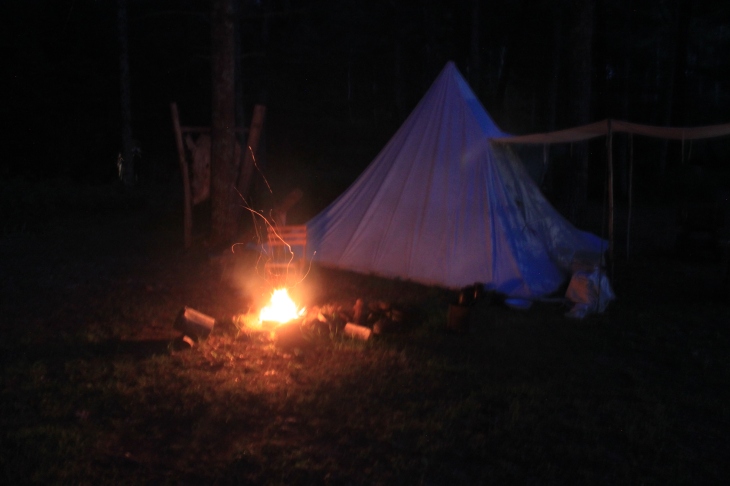 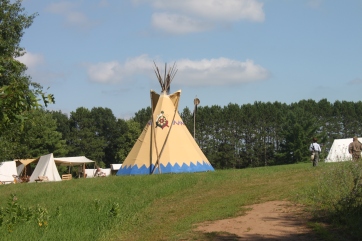 More camps up top at the Rendezvous 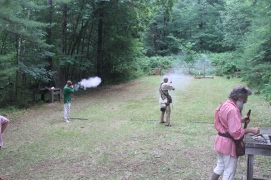 Some of the action at the novelty shoot 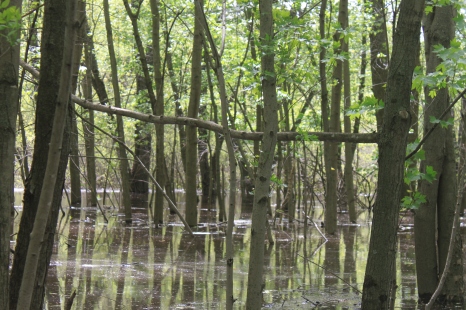 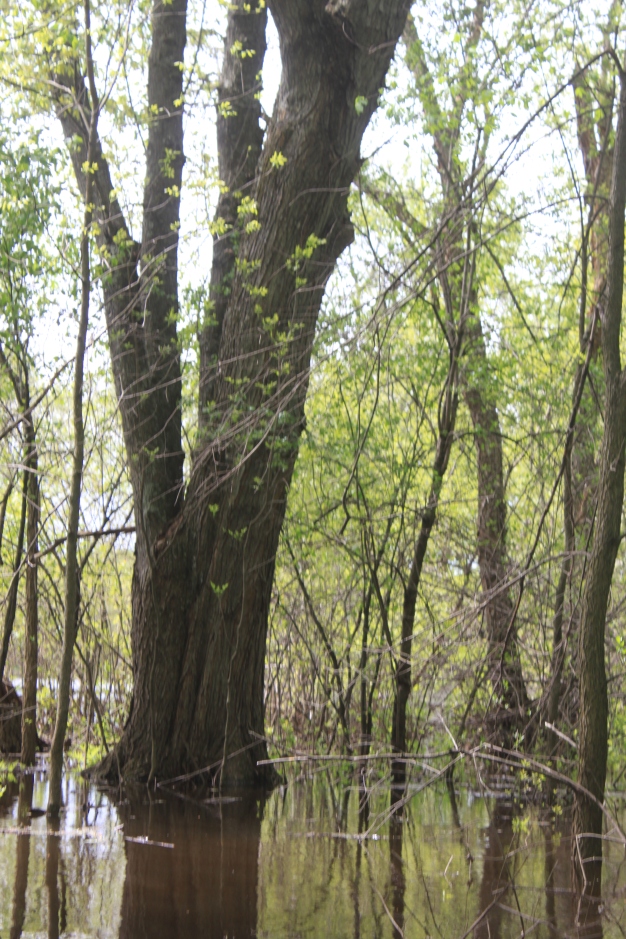 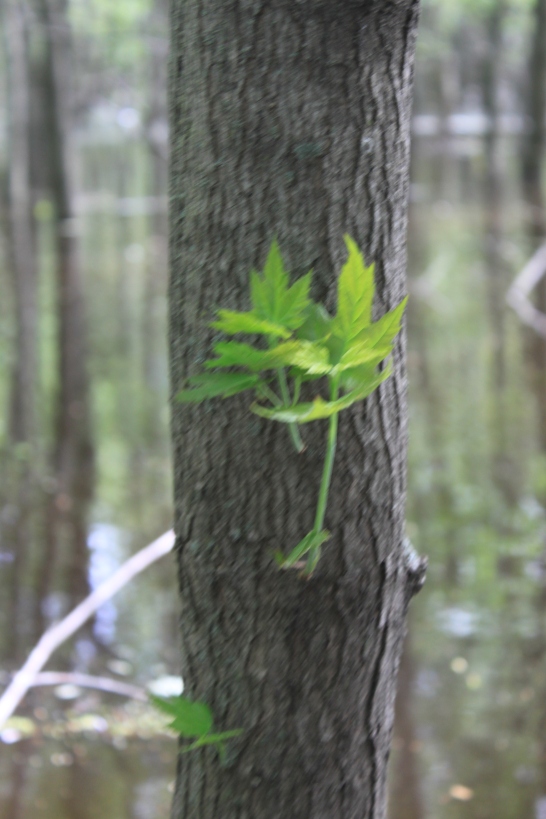 I was able to sneak in a canoe trip to the Dunnville Bottoms between rain storms this week. The super wet spring combined with the heavy snows from this winter have kept large portions of the river bottoms under water all spring. The river bottoms are formed by the confluence of the Chippewa and Red Cedar Rivers. Both are extremely high right now. I launched the canoe off of 580th Street into a bottom land lake. Late last summer this lake was mostly a muddy pit as the water level was really low. Now it is flooded. While paddling around the flooded bottoms, I was reminded of the bayou country I visited around Pine Bluff, AR. At least when floating the bottoms up north, I didn’t have to watch for alligators or water moccasins.

I went around a bend and a goose exploded out of the brush. A closer look at its exit point revealed this goose nest. I snapped a quick photo and got out of there as the two geese were flying over head and angrily honking at me. I expected to be divebombed by the geese. But I guess, I am too hairy and scary, so the geese left me alone. I hope the waters don’t rise even higher and flood the nest. 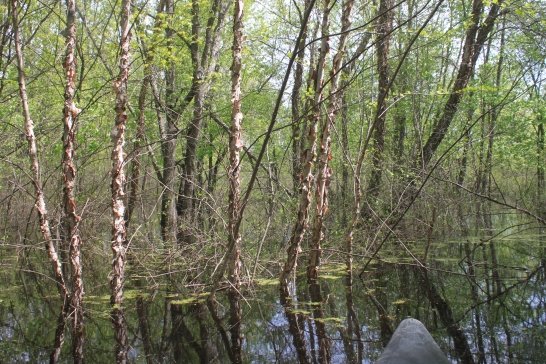 I was surprised to see water flowing swiftly in this area. The water creating the current had to come from the Chippewa River which is about a mile away from the launch point. The flooding is indeed mighty. 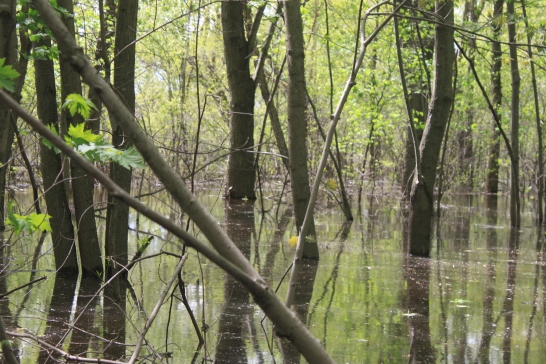 When you a paddling this summer, I hope the wind is at your back and the skeeters are few.

I took Maddy the mad mutt for a hike in the Dunnville Bottoms and found the place seriously flooded. The Red Cedar River was as high as I have ever seen it. Much to my surprise, my water hating dog ran in a shallow spot and began to play in the water. 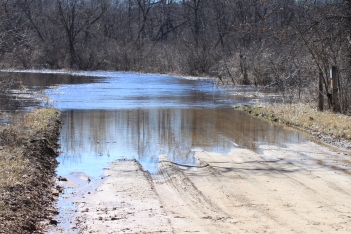 Took Maddy the mad mutt for a walk around Menomin Park today and saw lots of birds either migrating north or staking out nesting territory. 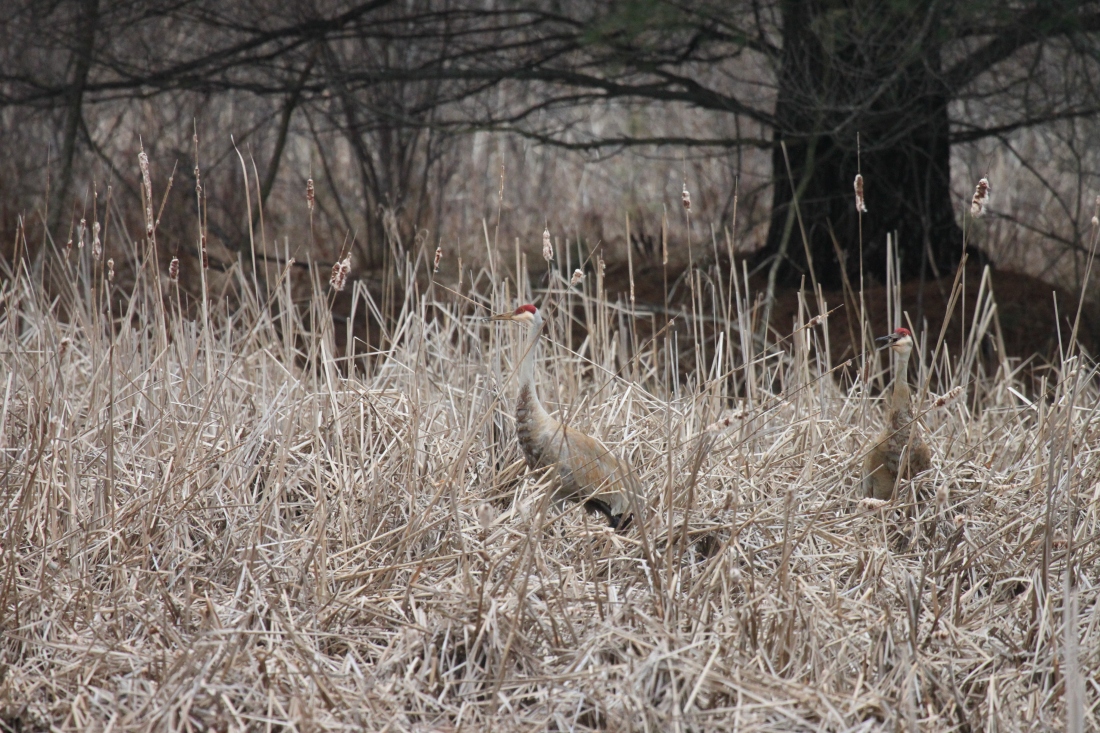 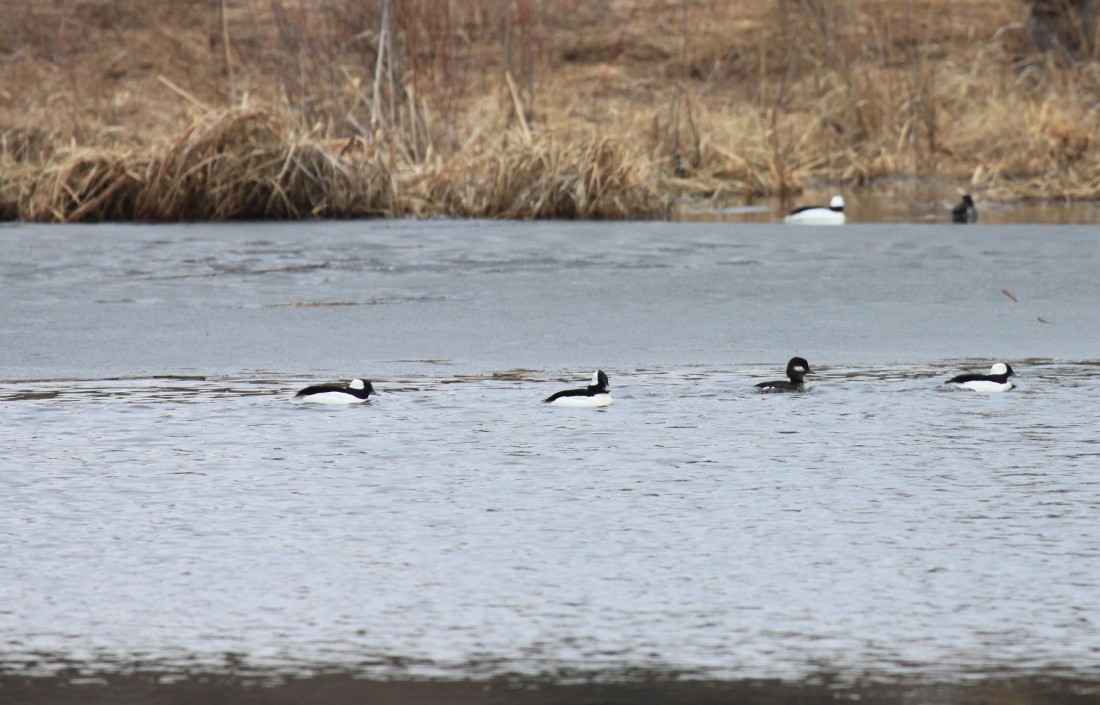 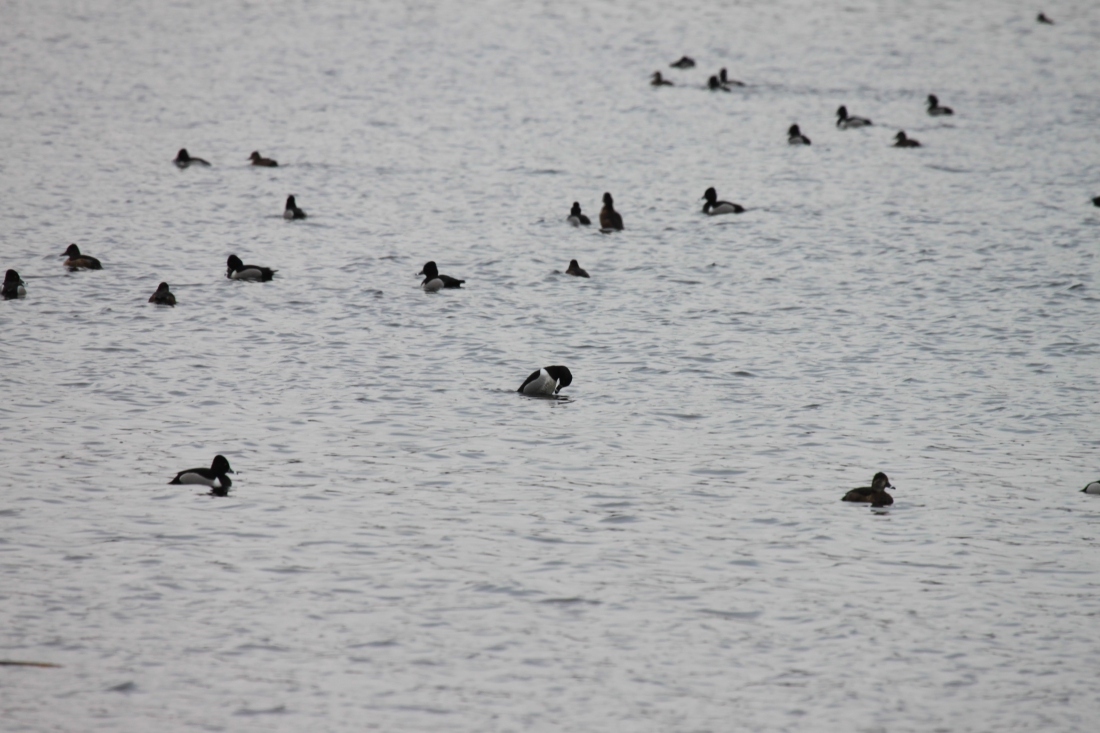 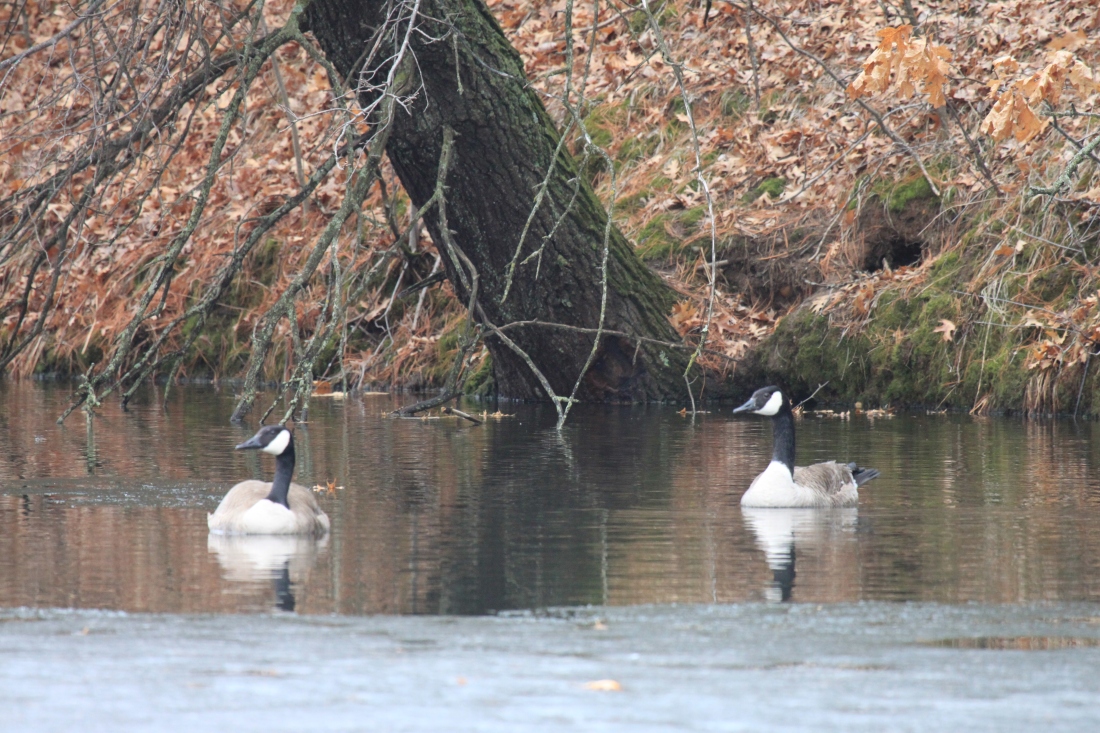